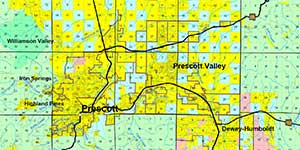 We often have a conflict with citizens resisting development. That is a natural phenomenon . . . it happens everywhere and for many decades. However, the Prescott area, and indeed Yavapai County, we DO have a lot of open space. The pie chart below depicts how much land is used by different entities. Notice that just a little over one quarter of the land in Yavapai County is privately owned. 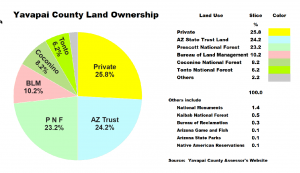 The open space is not all in the cities and towns. One of the reasons we like our open space is the solitude and relief it brings to our personal environment. We also enjoy having an abundance of wildlife in our surroundings. Most of us enjoy seeing the Mule Deer, Bobcats [Lynx more accurately] and maybe even a Coyote or a few Javelina once in a while. These can be appreciated in the forest — in our yards not so much. We also like to watch the Pronghorn Antelope in our open meadows. 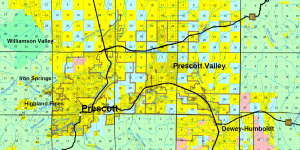 Most of the old mining claims have been divided into cabin or home sites.